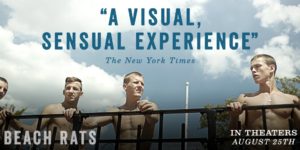 This is stunning examination of a young man’s coming of age experience.  It has been called profoundly sad and a refreshing portrait.  It was a huge hit at 2017 Sundance.  It has been described as raw, powerful, haunting and honest.

The exceptional cast keeps a low public profile but we identified some of the actors. Harris Dickinson plays Frankie as a young teen.  Madeline Weinstein is the want to be girlfriend.  Kate Hodge plays the teen’s Mom.  Erik Potempa plays an online character of interest.

The film is rated R for strong sexual content, graphic nudity, drug use and language.  The genre is listed as a Drama running 1 hour, 35 minutes.

Special note:  The following is rare reprint of a review posted in March of 2017 after a movie screening in London.  This movie has only now been released in the US.  It is for that reason we are posting our March review again.

This is the complex story of the final months of British rule in 1947 India, the haggling for a new government and the ultimate partitioning of India and Pakistan.  It also speaks to the social divisions between the Hindu, Muslim and Sikh communities, 500 of whom were servants to the British rulers in India at the time.

There is also a fascinating peek at the then political elite including Lord Mountbatton, his remarkable wife, and power brokers, Nehru, Gandhi and Jinnah.

It is well made, directed by Gurinder Chadha and written by Paul Mayeda Berges and Moira Buddin.  There is a huge cast featuring Hugh Bonneville as Lord Mountbatten, Gillian Anderson as Edwina Mountbatton, Manish Dayal as Jeet, and Huma Qureshi as the love interest.

Some critics felt the film tried to tell too many stories in the same film.  We agree to some extent but there is also a lot to tell.  It is well worth a look at an extraordinary time in history.

The Genre is noted as Drama/History running 1 hour, 46 minutes.

Note:  It was fun watching a British film, with a British audience, regarding a topic that was not necessarily Britain’s finest hour.

Maybe you have heard of Dolores Huerta.  I had forgotten until reminded about Cesar Chavez and the origin of the farm workers union in the 1950’s.  Dolores, mother to 11 children, was co-founder, with intense lifelong contributions towards worker’s rights.

Today Dolores is 87, still working for causes like ethnic curriculum in schools. This is an intense and touching documentary about her life efforts, her family and the challenges of ethnic diversity that still confront the country.

A large part of this film is made with original footage from the 1950’s through today.  The result is a story that is engaging, turbulent, inspiring and frustrating.

The film is not rated and runs 98 minutes.  There is already chatter about an Oscar nomination.  It seems worthy of contention.

We didn’t hear much talk about this film, and with the many late summer movies in theaters, this limited release is likely to miss its audience.  That would be a shame because this story is based on true events dating back to Brooklyn, NY in 1980.  It is a gut wrenching story spanning over 20 years.

It was written and directed by Matt Ruskin and features a cast of over 50 actors. LaKeith Stanfield, Nnamdi Asomugha, Gbenga Akinnagbe and Marsha Stephanie Blake are in the leading roles.

Tags associated with the production include: uplifting, thought provoking, intense and powerful.  It is listed as a Drama, running 1 hour 39 minutes.  It is rated R for language, some sexuality/nudity and violence.

This film is not perfect.  The flow is sometimes disconnected.  It can be a little confusing, and the overarching message could have been more powerful.  All that said, this film should be seen.  It is about real people and real conditions in our justice system.  Note:  John and I were the only two in the theater…again.