Special note:  This was an unusual week for movie going given the Corona Virus and its fallout.  We chose to stick close to home and viewed all of the following films in smaller theaters only a few blocks away from home.  We were the only customers in two of the three films.  It was a bit eerie.  J&J 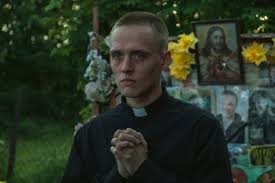 This is a fascinating film about a 20 year old man who lives in a Youth Detention Center.  He also presents himself as a Polish priest.  The story is blistering, intense, thought provoking and healing.  Polish with English subtitles.

First, this film was based on real events in South Carolina.  It’s the struggle between a white supremacy group in a small town and a thriving black community.

The production is filled with conflict and division.  It’s not subtle.  The performances are very good.  It’s not easy to watch at times but it’s also a powerful reminder that racism is often just below the surface.

It’s an interesting and topically relevant film.  It’s a satire about the ultra wealthy.  It’s also a commentary about heart felt values of the average participants.

As a former employee of a clothing manufacturer, it’s a commentary on the excessive exploitation of the garment industry workers world wide.  It’s somewhat funny and brutally realistic at the same time.